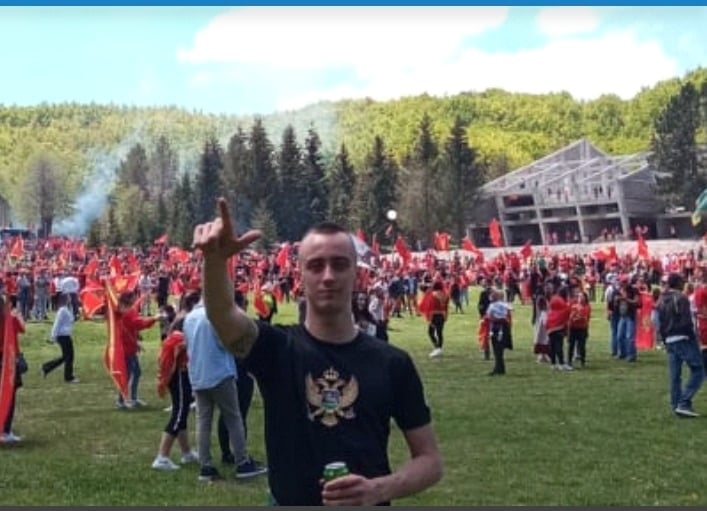 Marko Jurić’s guests in the Croatian Velebit Podcast were former deacon of the Serbian Orthodox Church (SOC) Bojan Jovanović and member of the Board of Directors of the non-governmental organization Montenegro International (MI) Danilo Brajović. The guests spoke on the topic of current events in Montenegro and the region, the role of the Serbian Orthodox Church and the evidence from Bojan Jovanović’s book “Confession How We Betrayed God“, published by MI.

– Serbia is a deeply communist and repressive state, and at the head of that state is a system led by the church-political mafia. That church-political mafia banded around all the citizens of Serbia who live there and is slowly suffocating them, and unfortunately that mafia through various organizations and individuals operates in other countries in the region and constantly creates an instability that has the most negative impact on Serbian citizens, said at the beginning of the address Bojan Jovanović.

He added that thanks to some other “winds” that started blowing from the USA, the European Union and the environment of Serbia, the actions of those people were recognized and that system is slowly declining.

– However, you know that the beast is most dangerous when it is wounded, and now you need to be very wise to speed up their fall. That system has been operating for the last three decades. Thus, in Serbia, you have one autocratic government headed by one leader, who has exclusively his own goal, and no one cares about the people’s interests. That leader, now in the character of Aleksandar Vučić, and before there were others, managed to create one middle class, and that is the class of satisfied slaves. These are people who have lost all sense of a struggle, and that is the terrible thing when the state gives you the opportunity to either be a contented slave, or to leave that state.

Jovanovic said that while in Serbia there is a system where one man determines everything, there is absolutely nothing that can be done about atrocities by the Serbian Orthodox Church (SOC).

– When something appears in public, all cases are used to blackmail that organization. The Serbian Orthodox Church has so far not received any negative outcome, nor has the Serbian government initiated any proceedings, although we have repeatedly addressed Aleksandar Vučić and Ms. Ana Brnabić, as well as the police and the judiciary, offering papers confirming atrocities within the SOC, always remained invisible. In the end, we decided not to offer anything more, because the government uses all the evidence to blackmail the Serbian Orthodox Church because of some of its personal interests, he added.

Jovanovic states that all available means are used by the Serbian Orthodox Church and the Serbian state, in order to realize the interests that concern only that system.

– This is done, primarily through pride, which is the greatest mortal sin in Christianity. The second way is that the population that can change something practically has to leave the country, and the third thing is the constant creation of prejudices. The people of Serbia are very poorly informed about what is happening in Serbia itself, let alone outside Serbia, and then the leader uses that poorly informed people to achieve his goal, by creating hatred and using other tools that lead to instability. An example is the current attitude of the majority of Serbian citizens towards Montenegro, where you can hear every day on regime television that they want Montenegrin citizens to move out of Serbia. You also have the uneasiness between Serbia and Croatia, which constantly exists and which is constantly fueled by the same centers of power. Similarly, we have prejudices against other religious organizations for the sake of one religious organization that has primacy in this area, not only in relation to other religions, but also in relation to other Orthodox factions that exist in Serbia. For example, in Serbia you have three other religious factions that operate there. The Serbian Orthodox Church thus has a privileged position in relation to other churches, both in Serbia and in other countries, such as in Croatia in relation to the Apostolic Orthodox Church, in Montenegro in relation to the Montenegrin Orthodox Church… It wants to abolish everything called the orthodox church, wants to be the only orthodox organization which is absolutely not normal, said Jovanovic.

As the most recent example of these prejudices, he cites the case when the Law on Same-Sex Communities was in the Assembly of Serbia.

– A story appears on regime television where they bring alleged experts to speak on this topic, who says that they are absolutely against it, that Serbia is a traditional state, that it destroys the reputation of one state, and at the head of that same state or government you have Mrs. Ana Brnabić who is a member of that community.

The book “Confession How We Betrayed God” provides evidence of the prevalence of pedophilia within the Serbian Orthodox Church, the false election of Serbian patriarchs and other crimes of this organization.

– This book opened one big topic, from the USA, through Europe, to Australia. It has opened up very controversial things that have been happening here and have been tolerated for decades, for some political and other reasons, and that is why we are all here where we are today. I realized the book in cooperation with the NGO Montenegro International with the intention of giving all Governments, state bodies and non-governmental organizations dealing with human rights, over 3,000 documents, so pedophilia is not an individual case but is widespread in the SOC, from the USA to Russia itself. This is happening, but the key question is why it is tolerated and kept silent. In the book, you will also find evidence of falsely chosen patriarchs chosen by the state security service, from Patriarch German, through Pavle, to Irinej. The essence is that the church itself is conceived on lies and deception, and that is the essence of the whole story, why it is easily used for dirty things that refer to daily political events, explains Jovanović.

When asked how faithful the Serbian Orthodox Church is to the spirit of Christianity, Jovanovic answered:

– As for the religious organization itself, which we mistakenly call the Serbian Orthodox Church, it is essentially not Orthodox at all. It is an atheist organization that no longer deals with religious issues in public at all. They no longer enter into the controversy whether God exists or does not exist, whether some religious instruction should be given, and so on. They have totally deprived themselves of it and they complete their policy and form of being water as if God does not exist. All this Orthodoxy inherited by the Serbian Orthodox Church is Orthodoxy invented by priests and bishops so that they can live comfortably at the expense of the naive people, and with its cunning plan the state system uses that organization to keep its subjects in fear and to be able to comfortably exploits them. You constantly ask your subjects to be submissive, to have to listen to you, and you make them cheap labor. The Serbian Orthodox Church inherits that definition, “if there is no such God that we have created, he should be reinvented.”

When asked how he commented on the election of Porfirije as Patriarch, Jovanović said that he is a falsely elected Patriarch.

– He will not be a Patriarch soon. If there is a judiciary in Serbia, if there is a police or some government body that would interrogate me or someone else, but to process it in the right way, this story would get an epilogue very quickly, he said.

The Serbian Orthodox Church changed government in Montenegro with the support of Serbia, Republika Srpska and Russia 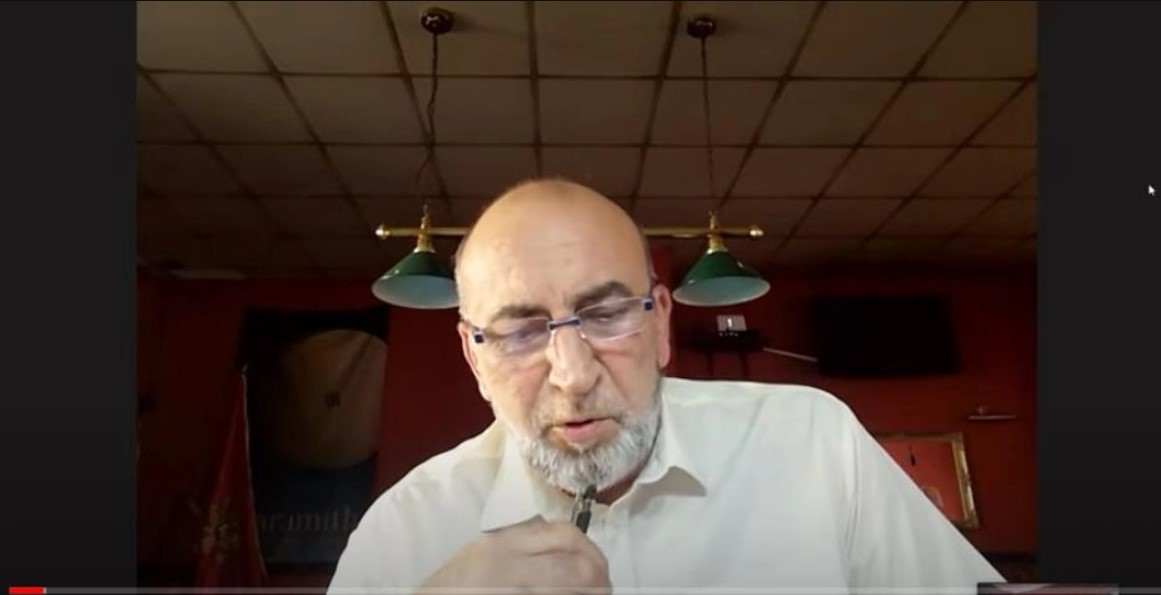 Speaking about the role of the Serbian Orthodox Church in the last election events in Montenegro, Brajović said that the problems began on December 28, 2019, when the Law on Religion was passed, which meant that all facilities built before 1918, ie until the fall of the Kingdom of Montenegro under Serbian occupation, belong to the state, and for other buildings that were built after 1918, the church is obliged to submit evidence that they are their owners.

– The Serbian Orthodox Church used that to launch riots in Montenegro in January 2020 under the pretext that the current government wants to steal holy objects, whatever that means. They used this situation to mobilize the “believing people”, as they like to say, and in the end, with the help of internet bots from Serbia, Republika Srpska and Russia, they directly interfered in the election process in Montenegro, together with those with dual citizenship and who came to Montenegro in an organized manner to vote, Brajovic said.

– This is an illogicality of the former government that is absolutely inexplicable, and the SOC took advantage of all this situation, uniting its block in three columns from the start – one, allegedly civil, played today by GP URA, led by Dritan Abazovic; the second is the one that is “neither on one or the other side”, and it is the Democrats of Aleksa Bečić and the third is literally radicals, only they are not called that but they are called the Democratic Front, led by Andrija Mandić, Milan Knezević and Nebojsa Medojević. Another characteristic of these elections is that the Serbian Orthodox Church engaged all its forces from neighboring countries, while our diaspora could not come to their country, said Brajović.

You can watch the whole broadcast here:

At the end of the 19th and the beginning of the 20th century, the embassies of Austria-Hungary, Russia,…